There are many ways you can volunteer for Marian House and the Smolen Family of four has proven that. 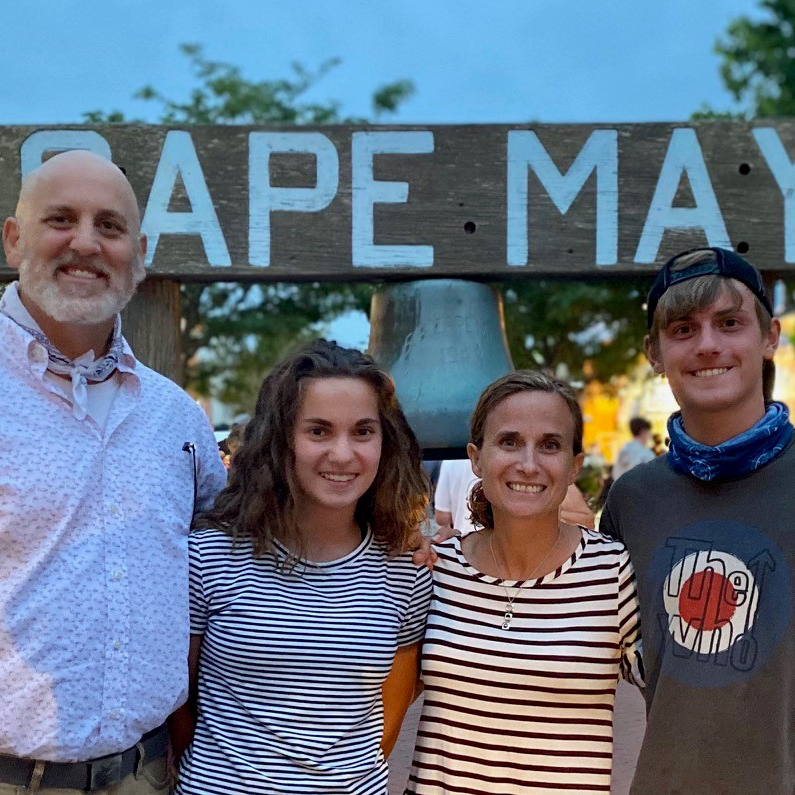 John Smolen is a Marian House volunteer and his connection to us dates to 2008, a connection he describes as “hanging out in Katie’s circles.” (Katie Allston, Executive Director). At the time, John was on the board of the Homeless Persons Representation Project (HPRP) and knew about Marian House from running into Katie at Cub Scout meetings. Katie’s son Quinn was in the Cub Scout pack with John’s son, where John was Scout Master. Katie’s husband Paul grew up in Kansas City, about one mile from where John Smolen grew up. Talk about six degrees of separation!

John is a lawyer at the prestigious firm of Ballard Spahr LLP, where they have a very strong “pro bono culture” and where John holds the 2020 Pro Bono Honor Roll Gold recognition. The firm’s belief is that a charity’s money is better spent on their mission than paying for legal services. Marian House was the beneficiary of Ballard Spahr’s generosity when we learned about the acquisition of the Women’s Industrial Exchange (WIE) Building and had a need for legal services.

Marian House had the pleasure of working with a team of five lawyers and paralegals: John Smolen, Teri Guarnaccia, Alyssa Domzal, Marybeth Orsini and Kate McDonald. John stated, “the Ballard Spahr team is super supportive of pro bono work and this was no exception. This was a fairly routine real estate transaction and was a teaching opportunity for some of our younger lawyers and paralegals.”

John’s wife Jenny is the business manager of the Catholic Community of South Baltimore, a combination of three churches in the Federal Hill area of Baltimore.

Jenny was able to direct financial donations to Marian House from the church collections. John and Jenny are also personal donors to Marian House and have participated in our 5K Race for many years.

When asked why the Smolen family is so devoted to Marian House John replied, “the Catholic connection was definitely a part of it. I have a deep- rooted Catholic faith and have an aunt who is a Sister of Mercy. The fact that Marian House was founded by the School Sisters of Notre Dame and the Sisters of Mercy made it easy for my family to connect with Marian House.”

We are grateful to the Smolen family and the team from Ballard Spahr for their support of the Marian House mission. 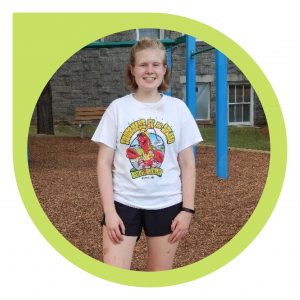 Cate Hutson is a 17-year-old senior at Towson High School. She runs track and cross country and also participates in the school’s Model Congress. She’s taking the virtual start to her senior year in stride and is focused on college application essays to mid-Atlantic schools with programs in biology and public health.

Marian House has been lucky to have worked with Cate over the past two years on a final service project as she finishes 11 years in the Girl Scouts. As an active member of her troop, Cate is following in the footsteps of her mother, a former Girl Scout, and her brother, who was once active in Cub Scouts.

After winning the Girl Scout Silver Award for a project focused on animal welfare, and before transitioning to what is sure to be a bright future, Cate decided to strive for the prestigious Gold Award, a feat achieved by only 5% of eligible senior and ambassador scouts, by devoting her time and talents to a capstone project which would build on the skills she’s acquired through her years in the Girl Scouts.

Cate heard about Marian House through her mother and a partner organization as she was exploring opportunities to work with people. After two years of thorough planning, Cate brought 23 volunteers out over 4 days in late July to clean and beautify the small, private playground behind the Notre Dame Residence at our Independence Place Campus in Pen Lucy, and spruced up some adjacent plant beds at the Independence Place campus. She acquired the tools and materials, as well as the people power, to remove trash and weeds, clean playground equipment, trim back vines and trees, replace gravel and rotted landscape timbers, install a drainage system and spread new mulch.

She coordinated with and procured resources from Hollins Market and Home Depot, gleaned input from experts at Mahan Rykiel Associates and those within her personal network, but it was the implementation phase of the project where she felt that she thrived and had the most fun. Despite having to wrap up the project in the midst of a pandemic, she was still able to mobilize friends, family, classmates and members of her faith community at Central Presbyterian Church to make her vision and the needs of our Marian House families come to fruition. 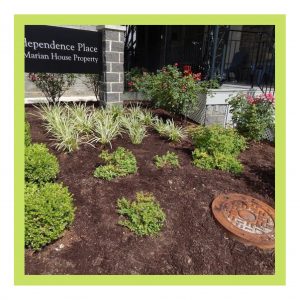 With a focus on sustainability, Cate has also provided Marian House with the details needed to maintain the refurbished space for our children and families to use long into the future. During a summer in which Marian House families have been more homebound than ever, this has been an extra special gift to us! We share our appreciation for Cate’s time and hard work. Congratulations on earning the Girl Scout Gold Award!